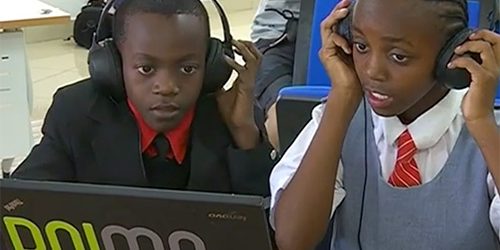 At the end of last March, I embarked on a journey that I had been looking forward to for quite some time. I was to join CodeBus Africa, and teach kids coding through music in Tanzania, Zambia, and Namibia. This text mainly focuses on my personal experiences during that journey, and especially on our first workshop in Tanzania. Before getting to the journey itself I would like to thank Roima Intelligence for not only being flexible enough to let me go on this trip, but for also providing CodeBus Africa with the single largest donation of laptops received for the workshops.
My first workshop was supposed to be in Mombasa, Kenya, something which I was thrilled about since I would then literally get a “menolippu mombasaan” (reference to a Finnish movie). Unfortunately, that workshop was cancelled, and instead we were to head directly to Dar es Salaam, Tanzania. That initial workshop in Dar es Salaam turned out to be a memorable one, not only due to the many challenges that appeared during the day, but also due to it setting the tone for me for what the CodeBus workshops were all about.
When the workshop, located at Buni hub, was supposed to start, half of the kids were still missing. When they finally arrived, we learned that most of them had never used a computer before, nor did they speak much English. Although this was by no means a unique situation for CodeBus, it certainly presented a challenge for us, especially since it was the first workshop for me and most of the other teachers.

Our project leader Irena from Aalto University’s Aalto Global Impact, and Buni Hub’s Events and Corporate Partnerships Manager, Mariam, started the workshop with an introduction to computers crash course. Irena started off by holding up a phone and asking the kids, with Mariam translating to Swahili, how many of them had used a phone before? Almost all the kids raised their hands. She then remarked that using a computer is not much different to using a smartphone, they are, after all, tiny computers. Then they asked the kids why they thought that the computers in front of them are called laptops? Why is the keyboard called a keyboard, and what is the mouse and the trackpad used for? The first task for the kids was to get familiar with the keyboard through writing their own names, and after that, some more complex sentences including the keyboards special keys.
Around this time Irena noted that some of the kids seemed a little restless after sitting for so long and up to this point mostly passively listening to the teachers. She told all the kids to stand up, and invented on the spot a shift-colon dance. Accessing colon through the shift key had been the teaching point at that moment, and Irena incorporated that nicely into a dance which got the kids all smiling and energized, and ready to continue learning.

After having taught the basics of using a computer, we moved on to coding using Sonic Pi. The beautiful part about teaching coding through Sonic PI is how easy to approach it is. I vividly remember my first encounter with coding during my initial year at Helsinki University of Technology (today Aalto University). Some hours of Java lectures and introductions to OOP before we even got in front of a computer. There was a lot of different concepts to grasp to even get the computer to perform the simplest tasks. It might have been due to the overly busy first semester, but I ended up failing my first course in programming and felt programming probably wasn’t my thing. Funny how I later, upon finally wrapping my head around coding, ended up not only taking pretty much all the coding classes available, but also making it my profession.
What makes Sonic Pi so fun and easy to learn is the easy to read minimalistic syntax and instant feedback of what you do. A sound can be generated with just one line of code, and a melody with a couple more. After only half an hour with the program the kids had already managed to make simple melodies, and a bit later, we could start to hear some pretty funky beats made by the kids. When lunch was served, I noted that one pair of kids had figured out the nesting of loops by themselves, something which we had not yet taught them. Awesome stuff.
Despite the initial challenges of the day, we managed to go through all the most crucial parts before ending the workshop. The day ended, as was custom, with a jamming party, where we would play the songs made by each pair of kids, and let everyone dance to the beats. It was crazy to think that most of these kids had started the day by barely daring to touch the computers, and here they were, half a day later, joyfully dancing to the music that they and their friends had programmed.

I think that our first day well demonstrated something that more or less occurred during all of the following workshops. Every workshop that I participated in had its own set of challenges and unforeseen turns. There are some natural reasons for this, a big one being the frequent change of venue and collaborating with new people most of the time. But the point is, despite all the hassle, we always found a way to make things work, and seeing the kids dance to their songs at the end of the day always made it worth the effort.
Another memorable moment from my journey was arriving to Ndola, Zambia a couple weeks later. The rain had been absolutely pouring down from the sky for the last part of the drive, and when we arrived at the school yard, we found a group of kids taking shelter under the stalls where we parked our bus. They looked a bit suspicious at us as we got out of the vehicle, not knowing what to make of this strange bus suddenly showing up at the school yard. But soon they relaxed as we introduced ourselves and they did the same. The kids turned out to be not pupils of the school, but rather have had come there from the neighborhood to play football at the school yard. Irena, with her amazing way around kids, soon was having a dance-off with some of the kids, surrounded and cheered upon by the rest of the crowd. The dancing turned into freestyle rapping, once again wildly encouraged by the audience. At that moment, the wonderfulness of the whole situation struck me. The rain still heavy around us, both groups stuck under the roof, but enjoying the moment and making the most of the situation at hand.

Irena with some students in Livingstone, Zambia

A final moment I would like to share was the CodeBus Africa concert hosted by the Finnish embassy in Lusaka after the workshop we did there. Performing at the concert were both local talents like Wezi, Cactus and John Chiti, as well as Finnish visiting artists Paleface and Biniyam. Paleface actually used some of the music created by the kids in Sonic Pi for his performance, which was awesome. Paleface and Biniyam also, together with the Finnish ambassador in Zambia, visited us at both our Lusaka and Livingstone workshops.

The Finnish ambassador in Zambia, Paleface and Biniyam visiting our workshop in Livingstone, Zambia

Group photo at the end of my last workshop, Rundu, Namibia

The goal of the one day worksops of Codebus Africa is not to make the kids into programmers in one day, but rather to introduce them to coding, and let them discover if coding is something they would like to learn more about. The local tech hubs, like Buni hub in Dar es Salaam, is then to provide the tools and know-how for the kids to continue exploring coding and technology. All in all, I participated in 9 workshops in Tanzania, Zambia, and Namibia. I would estimate the number of kids to attend those workshops to be little over 400. As I’m writing this blogpost, Irena and the last batch of instructors from Finland are hosting the final workshops in South Africa, which is the last country of the CodeBus Africa journey. When the bus finally reaches the its last stop, Cape Town, a total of 44 workshops will have been held across 10 different African countries, giving around 1800 children a glimpse of what coding is all about. Hopefully, many of them wants to continue to explore coding through the local tech hubs, and based on the superb feedback we got during our workshops, many of them will.
Valter Sandström, Roima Intelligence
21.5.2017, Helsinki