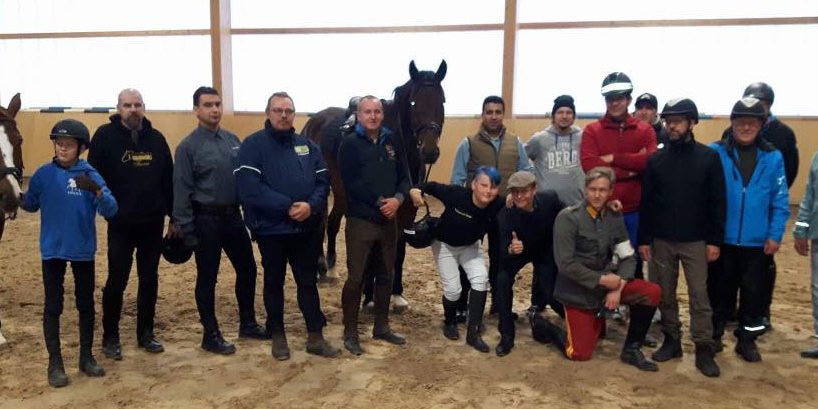 Just a few decades ago, horseback riding and horses were something that belonged almost exclusively to the world of men. Riding was a sport mainly exercised in the defense forces, and you wouldn’t really see women taking care of draft horses back at home either. Compared to that, the current development which has seen women mounting on horseback is a great thing.

My new best friend Onni, a riding school horse at Aino Equestrian Center. The better half of the horse-and-rider duo is on the left.

On September 30, Aino Equestrian Center in Järvenpää hosted an event titled Men on Horseback. The moving spirit behind the event was Korumies Arvi, the youngest entrepreneur in Finland. This 12-year-old boy managed to save enough money to buy himself a horse by making and selling jewelry at various events. Together with his coach Antti Jurvanen, Arvi was pondering how to attract more boys and men to riding stables, and finally came up with the idea of organizing the Men on Horseback event at Aino’s facilities.
Thus, on Saturday morning at 7.30 am, a total of 15 men who had started riding within the last year gathered together on the yard of Aino. Or actually, to be precise, a couple of the men were in fact yet to get started with the hobby – for them, this would be the very first time on horseback. The men’s ages ranged between 12 and 75 years.

Aino Equestrian Center kindly borrowed five of their riding school horses for the event, and the 15 men were divided into three groups. The first team comprised of five men who had no prior experience of riding. Thus, those who had ridden before walked beside the horses, hand-leading the first-timers. As the tension started to ease and breathing began to return to normal, the smiles gradually widened on the riders’ faces.
The men in the other two groups were not first-timers, but with less than a year of experience, you can’t really demonstrate particularly advanced skills either. However, what was lacking in skill was made up for by effort and enthusiasm. Although it must be said that in the last group, the young heroes Arvi and Risto really showed the older men how to do more advanced things with horses.
The session was also filmed for a TV program to be aired on Channel Four in Finland next spring. We’re eagerly looking forward to see that!
Next on the agenda we had a forum on eventing, which is said to be the king of all competitive equestrian sports. Seppo Laine, the grand-old-man of eventing, and Elmo Jankari, a Finnish Olympic rider, enlightened us about the secrets of this equestrian sport. Elmo gave a coaching presentation together with the young promises in eventing, Axel Lindberg and Sami Siltakorpi. The biggest surprise of the day was reserved for Korumies Arvi, as right in the middle of the vivid discussion, Arvi’s horse was suddenly brought to the scene and Elmo suggested a little training session. Instead of getting overwhelmed by the situation, Arvi eagerly seized the opportunity and was clearly very excited.

In the course of the day, a more serious topic was also opened for discussion, namely bullying. Bullies can make anyone a target for any reason that makes the victim stand out from the crowd somehow. In today’s world where horseback riding is seen as a sport for girls, bullies might quickly target a boy who rides. Having heard many different stories about bullying, the final conclusion is that you can’t find fault with the targets, as there’s nothing wrong with them. The fault is with the bullies, and that’s where you should start looking for the root causes and solutions to stop the bullying.
The partner of Aino Equestrian Center, Mercedes-Benz, was also present at the event; the newest collection had been brought to the stable yard for test driving. Thus, you could also find a “Roima Intelligence connection” at the event – manufactured by the Uusikaupunki car plant!

Perhaps this would be a nice car for hauling our horse trailer?