Mostly about remote work, a couple of words about globalization

Remote work has been the hot topic of flexible working life for the past couple of years. At Roima, we offer our employees the opportunity for flexible working, allowing Roimians to work either at one of Roima’s many offices or remotely according to situation and need. Our technical Quintiq system consultant Samuli Huikuri took the traditional remote working one step further and moved his home office desk temporarily from Tampere, Finland, to Budapest, Hungary. Read about Samuli’s thoughts on remote working in Finland and abroad!

The trend of remote working

Remote work has been the hot topic of flexible working for the past couple of years. The possibility for remote work might nowadays be a decisive factor for many when looking for work or changing jobs. In social media, we often see pictures of coffee cups in a garden or at a café, or of a dog serving as a home office workmate. I have posted similar photos myself, and there’s nothing wrong with that. But the potential disadvantages of working from home have also been brought to the spotlight. How to find the right balance?

As an increasing amount of work is performed online, the possibilities for remote work and flexibility grow automatically; employees are less and less bound to time and place. For instance, in my work as a technical Quintiq consultant, almost a 100% of my team is located somewhere else than myself. Most of my team members are abroad, and even the closest ones are a couple of hundred kilometers away from my home city, Tampere. And, as my work consists mainly of online meetings with my team and customers, the question easily arises: why would my location make any difference? Why would I drag myself to the office, as commuting would consume a lot of time and no-one at the office does the same work as I do? At home, I can brew my own coffee just the way I like it, and listen to my favorite radio channel without anyone commenting on my choice of music. Sounds tempting, doesn’t it?

Pros and cons of remote working 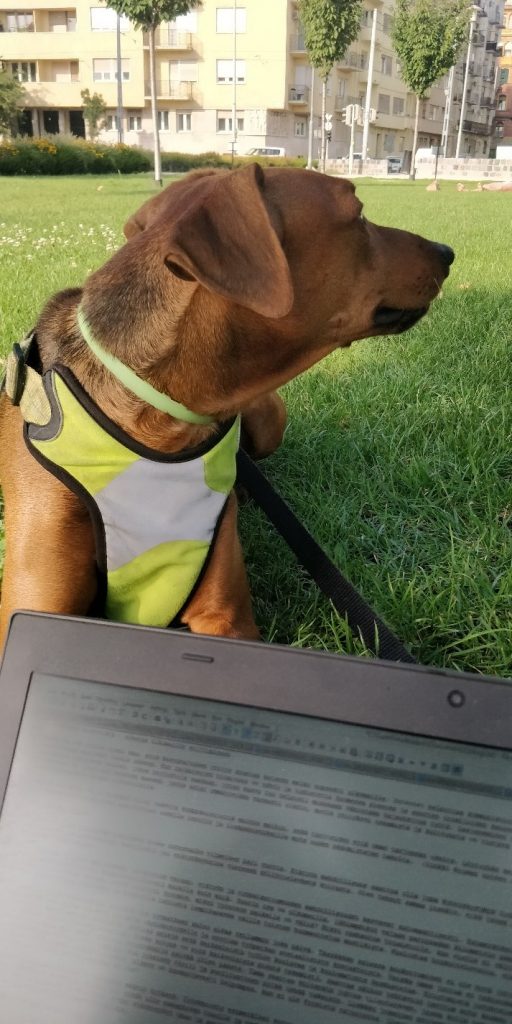 To my mind, remote work is good for you to a certain extent. At its best, working from home can be very relaxing, as you can read your emails in your dressing gown while slurping coffee or tea from your favorite mug. You can take your dog out for a walk during your first break in the morning, and even run some errands in the middle of the day upon need. The last-mentioned activities are naturally possible thanks to flexible working hours, which we at Roima have. Upon need, the reliable remote connections to our own and customer systems even allow us to work on the go at railway stations, in terminals, and on the trains and buses – of course, while ensuring information security.

Remote work is addictive, especially if commuting takes up a lot of time every day. However, you should be careful not to get too addicted. Even though remote work might save some minutes per day, it may predispose to loneliness and social isolation. Even if your colleagues would not do the same work as you do, being at the office always provides some social interaction – joking, coffee breaks, lunch, perhaps even games and discussions around work and other stuff. When you start working from home, you might not even notice getting isolated at first. But some day, you might just wake up and realize that you haven’t been to the office for days.

Another risk of remote working is that the line between work and free time might easily get really blurry. At home, there is always a pile of household chores waiting, and you might easily find yourself getting some of those done during the workday. And why wouldn’t you – when the working hours are flexible, so you can work the hours back later in the evening. However, this might lead to a situation where you work the normal 7½ to 8 hours per day, but have to stay near your computer and think about work-related stuff 10–12 hours a day, as you have to make back every 15-minute and 20-minute breaks you take. In addition, anyone who has ever done project-based work knows that sometimes you simply “have to” be flexible and work longer hours. Stretching the workdays one after the other is a lot easier when you don’t have to change your physical location, and thus, you can easily be tempted to work late more often than perhaps would be good for you. Have you ever noticed how well you can shift your train of thoughts from work to other things on your way home from work? But what if you don’t have that journey home?

Flexible work and the possibility for remote working are a great thing and make organizing your personal and working life easier in many ways, but I must say that I’m really glad that Roima also provides the opportunity to work at the office when you feel like it. Remote work is a good tool and a great opportunity when you use it right – but it should not be the only or permanent solution.

Why, then, do I think about this topic so much that I even decided to write a blog post about it? It so happened that in 2018, I got a great opportunity to move abroad for a few months with my family, namely to Budapest, the capital city of Hungary. I did not think it would make any difference whether I worked in Tampere or in Budapest, so I decided to ask what my employer would think if I would temporarily work from abroad. The idea received a positive response, and pretty soon we were able to start making arrangements.

My home and office in Budapest was a two-room apartment in an over a 100-year-old apartment building in the Pest side of the city. The apartment was fully furnished, so the only thing I needed to buy to set up my home office was a desk. The move felt like a mini-holiday, as we drove along the Via Baltica through Estonia, Latvia, Lithuania, Poland and Slovakia. 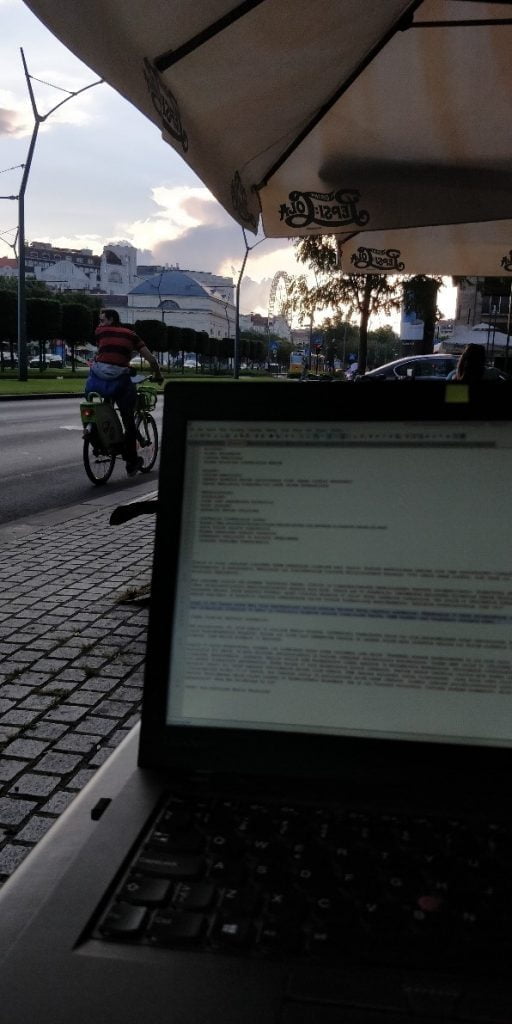 In Budapest, communicating with my team was as easy as before, as if I hadn’t changed my country of residence at all. All this is best demonstrated by the fact that, as I had not explicitly mentioned the move to my team (although I had not kept it a secret either), many of my teammates did not even notice I was no longer in Finland.

When planning the move, I had to consider all the above-mentioned opportunities and pitfalls of remote working, to ensure efficiency both when working and in clearing my thoughts from work. Already before moving, I laid down some clear ground rules for myself, and it turned out it was easy to follow them. I was naturally able to make compromises as well, but the new and exciting environment made it easy to keep the working hours under control. Budapest offered so much to see, and a walk along the banks of the Danube shifted my thoughts efficiently from work to something completely different.

I heard that it was a warm summer in Finland, but in Budapest, the weather pampered us with its warmth right from the day of our arrival. Thus, whenever my calendar allowed, I spent time in the parks and cafés of the city, even in the middle of the day – sometimes working, sometimes just relaxing. Taking a longer break in the middle of the day every now and then did me good, as long as I made sure that it didn’t become an everyday habit. I decided that in future, also in Finland, I would always make myself a timetable, including my hobbies and other personal life activities, such as walking my dog. The timetables do not have to be carved in stone, but I have come to notice that following the timetable should preferably be more regular than not following it.

A couple of words on globalization

Finland is such a small country that any growth-oriented company will quite soon start to think beyond the national borders. The internet facilitates communication, Scandinavia could almost be considered Finland’s home market, and even the rest of Europe is physically no more than a few hours away. When the solutions have successfully been tested and verified in Finland with small and big companies, Scandinavia and Europe are a logical next step.

We at Roima have strong relationships with many companies in other countries, both as an integrator and as a service provider with our own product offering. In addition, we have an office in the Netherlands and, since last summer, two offices in Sweden. With the entry of a new majority owner, Intera Partners, in 2018, Roima received new energy to invest in international growth.

International expansion will create both new challenges and new opportunities. We will start new projects in an increasing number of different countries, so the growth will mean more scattered work. Native employees are needed and hoped for in many countries to ensure that things are understood correctly, but know-how and culture must also be exported from Roima’s current offices. This will open up both short- and long-term working opportunities outside the borders of Finland for those interested.

If you ever get the chance to go abroad, I sincerely recommend you seize that opportunity – both for the benefit of yourself as an individual, and for the benefit of your company. The variety to everyday life is refreshing and can indeed feel like a holiday; studies have shown that living abroad benefits both the employee and the employer. Experiences make us stronger and help us understand things from different perspectives (https://hbr.org/2018/05/how-living-abroad-helps-you-develop-a-clearer-sense-of-self). The opportunity to work remotely from home or abroad gives employees both freedom and responsibility. I believe that this can help to improve employee motivation as well as other activities. I believe that, personally, thanks to this experience, I’ll be better equipped to meet people from other cultures and visit foreign cultures myself. I’m extremely happy and grateful to have been given this opportunity to work from abroad!

What do you think of remote work and working from abroad? Do you even have personal experience? Share your thoughts! I would be happy to receive feedback on this piece of writing and discuss related topics – remote work, job satisfaction, and working abroad. And of course, what it’s like to be a Roimian!

Disclaimer: Some of the things I’ve mentioned in this blog post might seem self-evident. However, despite the banalities, I wanted to say those things as well, as not mentioning certain points can steer our thoughts in certain directions, just in the same way as mentioning does.