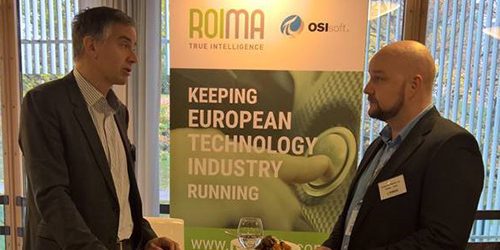 Finland is a SAP country, and thus, the anniversary event attracted an abundance of visitors to Finlandia Hall and the atmosphere was quite relaxed and laid-back. The event offered a great chance to catch up with old acquaintances as well as to meet new people.
During the day, it became clear that digitalization and the introduction of new technology are indeed progressing, even if you hardly notice it in everyday life.
One of the main speakers of the event, Tom Raftery, peeked into the future by taking a look at the past, namely at the revolution brought about by smartphones. It’s now ten years since smartphones first entered the market and started to become more common. In practice, they have changed the lives of all individuals and companies “in secret”; in daily life, the change easily goes unnoticed, but a closer analysis reveals that the impact on the society is in fact quite dramatic. It’s easy to agree with the conclusion that in the next ten years, digitalization will revolutionize the operational practices and the cost and revenue models of many industries.

Roima and Osisoft together at a shared stand


At the partner exhibition, Roima had the pleasure and honor to share a stand with Osisoft. Osisoft is a strong professional in the field of real-time operational data management infrastructures and refining data for human use and for further processing, which is one of the prerequisites for the sustainable development of digitalization.