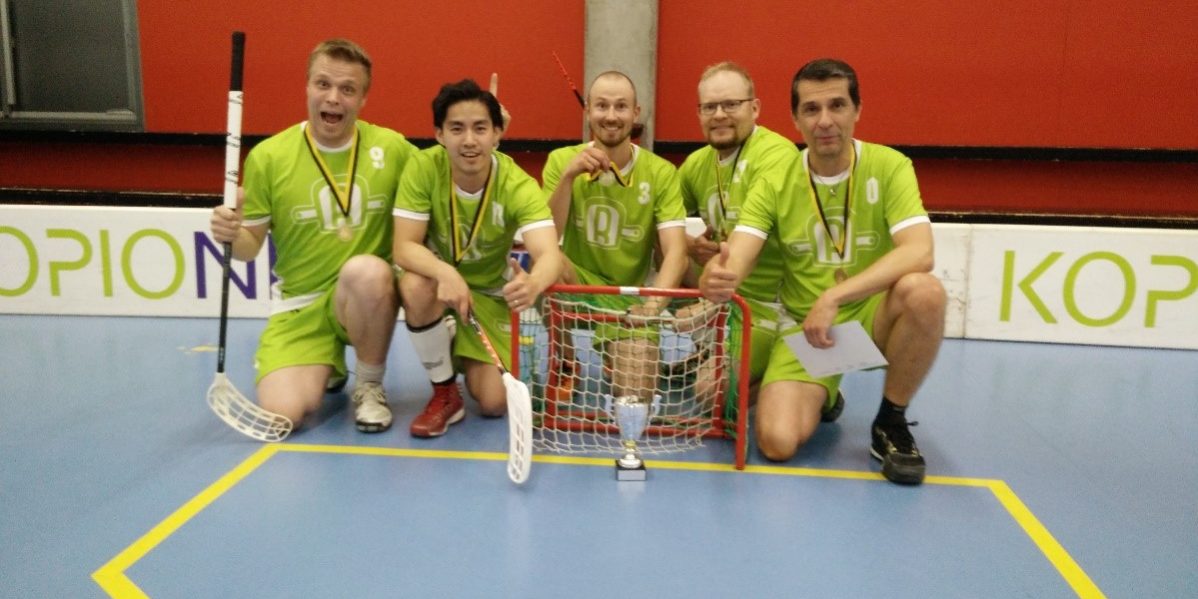 Our team of five energetic Roimians – Juha Kulmala, Hiep Le, Tuomo Kokkonen, Toni Mattila and Mikko Ojala – entered the tournament held at the Fat Pipe Center Arena Center Myllypuro with rather moderate expectations; the team was only put together less than a month before the tournament and the members had no prior experience of playing any sports together.
The tournament matches were 12-minute-long intensive encounters played 3 on 3 in a small rink. The time between the matches could be up to an hour, so it was important to maintain a good level of nutrition, hydration and concentration.
The Roima team started strong, winning its first match by 5-4 and the next match by 7-0.

After the victorious start, however, Roima fell to a 4-6 defeat against the Finnish Floorball Federation (Salibandyliitto). The defeat was partly due to our lack of substitute players, as the third match had to be played without Toni, who was busy playing in the Mixed league, and Juha, who was away celebrating his child’s birthday.
In the quarter-finals, Roima defeated the Labour Insitute for Economic Research in an evenly-matched encounter, finishing 2-1. In the semi-finals, Roima faced one of the tournament favorites, the sports club of the Finnish Parliament – and, surprisingly, managed to beat them by 3-4, thus making it to the finals.

Before the final match, the Roima team had a 1.5-hour wait. During that time, the team thought back to their joint journey that had brought them to this moment, and decided that they would not settle for anything less but victory. After some careful soundings, the team even managed to drag Juha back to the game, and the Roima team entered the finals with a top-notch crew.
In the final, Roima met again with its tough rival, the Finnish Floorball Federation. For Roima, the game started on a rather gloomy note, as the scoreboard soon read 5-1 for the opposing team. Moreover, extra drama was brought to the game by the game clock, which stopped by itself at approximately 8 minutes. With Roima already trailing by four goals, the game took a sudden turn: Roima was awarded a penalty shot and, though under great pressure, Roima’s Hiep scored!

That goal gave a big mental boost to the entire Roima team for the final minutes of the game. Filled with new determination and energy, Roima shot the ball into the goal four more times, making the impossible possible – Roima took home the title of the Finnish Floorball Champion!
After the match, the team’s feelings were a mix of joy and disbelief.
The day spent together molded the barely acquainted colleagues into a tightly knit team that, together, managed to overcome all challenges and eventually, at just the right moment, to raise to a glorious victory.
This is an excellent start for Roima’s Summer Day this Thursday and other upcoming happenings!

On behalf of the winning Roima team,
Tuomo Kokkonen

Disclaimer: The author has written this blog in an euphoria raised by his first-ever Finnish Championship title, so the things might have gone slightly differently in reality.